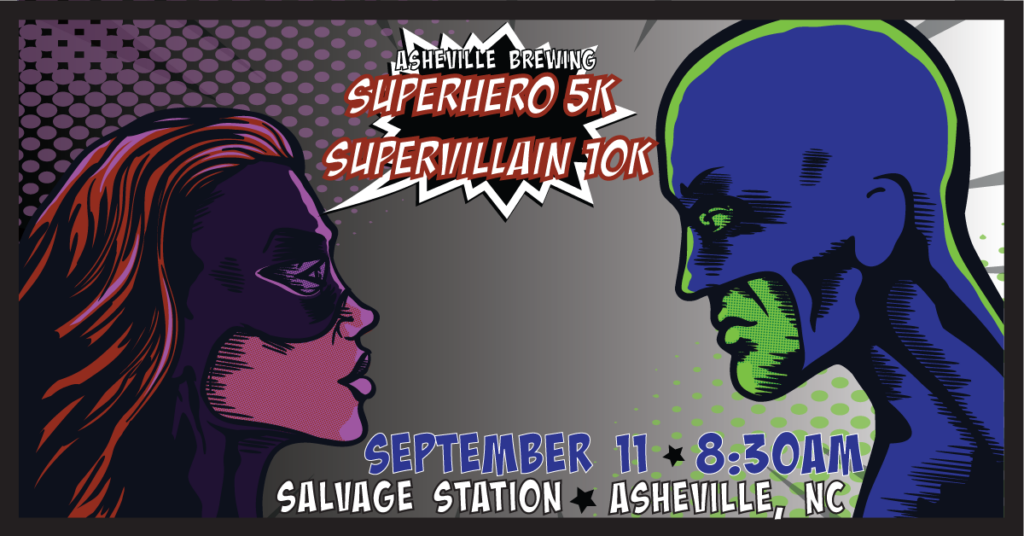 On January 15 registration opened for the 2021 Asheville Brewing Super Hero 5K and Super Villain 10K, Presented by Black Orthodontics, marking the fourteenth year that some version of this event has taken place in Asheville, NC. 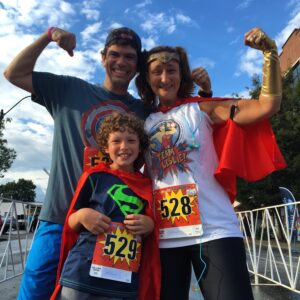 In 2010 Asheville Brewing Company decided to shift focus and efforts to just one race – The Super Hero 5K. They would successfully manage it themselves until 2014, when they asked Glory Hound Events to take over. That year, with a new start/finish line one block west on Lexington Ave. and a post race party at the newly opened Mill Room, Glory Hound Events first year managing the race hit a huge snag, an early fall snow storm. This caused a one-week delay, but the race was still a success with almost 200 racers participating.

Building on the success of previous years, in 2015, the Super Hero 5K became a part a new weekend long event called the Asheville Running Experience. Featuring three different races (ARX Half Marathon, Super Hero 5K, Chasing Trail 8K) and an urban scavenger hunt (The Asheville Urban Odyssey) in downtown, the Asheville Running Experience was billed as two days of endurance racing and fun that had something for everyone. Keeping with tradition, the Super Hero 5K race continued to take place in downtown Asheville, with a new course starting and finishing in the South Slope. This was also the start and finish line for the new ARX Half Marathon that took place earlier in the day. 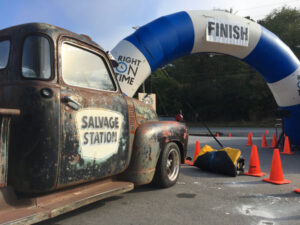 In 2018, after months of discussion and planning, a decision was made to relocate the Super Hero 5K to the Salvage Station in the River Arts District. With the relocation, the ARX Half Marathon became the Super Villain 10K. This change of venue also offered new courses, as well as lots of new amenities including ample parking and a beautiful venue for pre and post race gatherings.

After a year off due to COVID-19 in 2020, the Asheville Brewing Super Hero 5K and Super Villain 10K, Presented by Black Orthodontics, will return on Saturday Sept. 11 to the Salvage Station. Both races will begin at 8:30 AM with the races going opposite directions down Riverside Drive. The Super Walk, which was started in 2018 and gives non-runners a chance to join in the fun, will also return. All races will finish at the Salvage Station with our traditional post-race party and awards ceremony. The tradition of awarding prizes to the best dressed super hero and super villain, will also continue. A beer for all of-age racers will also be waiting at the finish line, thanks to our forever friends at Asheville Brewing Company.

We are proud to continue the legacy Asheville Brewing Company started in 2007 and look forward to seeing all of our super heroes and super villains at the starting line this fall.

Glory Hound Events was started in 2006, initially managing the historic Bele Chere 5K. Shortly after that first year the Lake Logan Triathlon was introduced and eventually became a part of the Lake Logan Multisport Festival. Glory Hound Events is now the largest endurance event management company in the Western North Carolina region, producing an average of eighteen events annually. In addition to producing its own events and those for a variety of clients, Glory Hound Events offers consulting services for events outside of Western North Carolina looking to take theirs to the next level.