We are celebrating an important occasion on September 24 – the 15 th anniversary of the Power of Pink. It’s hard to believe it has been that long since the idea was first conceived but we are extremely proud of what has been accomplished and the people it has helped in that time.

We thought it would be fun to look back at how the event started, what it looked like in the early years, what has changed, and the impact it has had.

Part 1 – In the Beginning 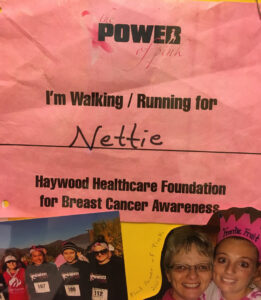 Memory bibs have been a part of the Power of Pink since the first race, allowing participants to carry the name of someone who is fighting a battle with cancer or lost that fight.

At that time the Health Department received funding from the State of North Carolina for the Breast and Cervical Cancer Control Program, which provided cancer screenings for underserved women in the county. Marcia had just been informed their funding had been cut to the point they would run out of funds in May and that more cuts were expected in the new fiscal year. All this meant a large number of women would not receive the screenings that could provide early detection of breast cancer.

I was included in this group of healthcare advocates to maybe create an event that would help make up this shortfall. The exact details are a little fuzzy after all this time but the consensus was we wanted to do something that allowed women to impact other women while also involving the general population. This became the Pink Relay for Women on November 10, 2007 – a 20 mile, women’s only running relay around Haywood County. Teams of five would run four-mile segments with their teammates shuttled to and from transfer points along the route. The race would start and finish at the Haywood Regional Health & Fitness Center and because, we didn’t want to exclude men or non-runners, the Real Men Wear Pink 5K and Bubble Gum Fun Run were also created.

The first year started slowly with only five teams registered by mid-October but the word spread fast and we had twenty-four teams lined up by race day. Early November was cold back then and there was snow flying around all morning. That didn’t deter 67 runners from taking part in the 5K and a number more in the Fun Run.

What strikes me now, looking back to that first year, was the audacity of it all. The 20-mile route I laid out took runners through Clyde and into Lake Junaluska; into Waynesville and back to the hospital with multiple agencies and volunteers making it happen. I can’t imagine the reaction if I were to propose something similar today.

In the end, it worked. All of our teams made it to the finish line; all had a good time doing so and we raised almost $8,000 for a wonderful cause.

Part 2 – Coming to Our Senses