We are celebrating an important occasion on September 24 – the 15th anniversary of the Power of Pink. It’s hard to believe it has been that long since the idea was first conceived but we are extremely proud of what has been accomplished and the people it has helped in that time.

Part 2 – Coming to our Senses 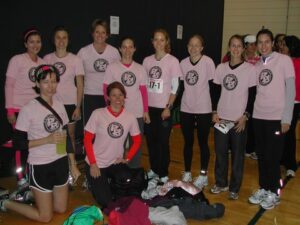 Despite the success of the Pink Relay in its first year, we all realized the current format might not be replicable going forward. The logistics of moving four sets of runners to different points on the course and then back again was daunting and very labor intensive. Still, the camaraderie and sisterhood was something we wanted to maintain and expand upon. The solution was creating a one-loop course that each member of the team ran. Not only did that reduce the footprint from 20 miles to four, it also allowed each team member to watch the baton exchanges and hang out with their teammates throughout the event. Teams could also keep up with the status of the race by means of a tote board, where we posted splits and current times after each leg.

With the change of the relay to a four-mile course, we also changed the 5K to a four-mile loop as well. Having both races along with the Bubble Gum Fun at the same venue increased the electricity of the event and allowed people in different events to support one another.

The overall result for the 2008 edition was extremely positive, attracting 24 teams again to the relay and increasing participation in the Real Men Wear Pink 4 Miler and Fun Run. 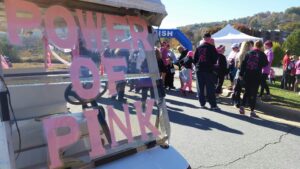 In 2012, the event was rebranded to the Power of Pink 5K with just one event. For the next five years, we tinkered with it, adding theme baskets, provided by hospital departments, in 2017 to provide a new revenue stream to the event. While this helped our fundraising reach its highest total since 2009, it did not increase participation as we had the smallest field since the inaugural year with only 133 runners and walkers.

As we grappled with what was wrong and what we needed to change, the common theme we heard was the difficulty of the course. Haywood Regional Medical Center is located on a hill so while the first part of the course was downhill then flat, the second half was uphill, including the very hard, final climb back to the Fitness Center. This deterred many runners from participating a second time and others from coming at all as word go out about how challenging it was.