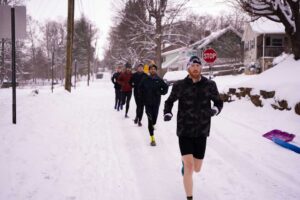 The wintertime isn’t the easiest time of year to run. It can be brutally cold, dark, and windy. But with a bit of extra planning and the proper clothing, the wintertime can be a runner’s favorite time of year to run. Take note of the following tips put together by the crew at Jus’ Running (WNC’s Running and Walking Headquarters) and you’ll be running year-round, including in the depths of winter.

Dress Properly
There’s no such thing as bad weather, only bad clothing.” It’s true, inappropriate clothing can turn any weather unpleasant during a run. Ask any experienced runner and they will tell you that being comfortable when running in cold winter weather requires careful attention to detail. Dressing properly for cold-weather running is like an art form – it takes a while to master. Trial and error are required along the way. Being improperly dressed, whether under or over, can be enough of a distraction to ruin a run. Figure out the proper pieces and layers for each specific type of weather, though, and you’ll be fully enjoying every wintertime run.

Take a look at the weather and plan accordingly. Take into consideration not just the outside temperature, but also the wind, sunlight, humidity, and time of day. A windy day will make the outside temperature feel much colder than what the thermometer says. Sun and blue skies will often make it feel warmer than it actually is. High humidity will make it feel colder than it actually is. The time of day also matters. Morning runners may consider underdressing a bit because the temperatures will often rise throughout the morning. Late afternoon runners will find that the temperatures may plummet through the course of their run, making it a good idea to consider overdressing a bit. 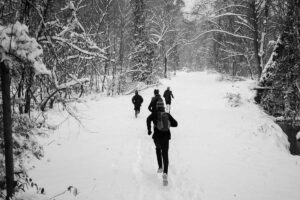 Some cold-weather running essentials are gloves, a beanie or headband, long sleeve shirt, pullover or jacket, and tights or pants. Pick pieces with technical fabrics as they’ll keep you warm while also being breathable which will prevent you from overheating. Really windy? Consider wind-proof fabric which will help block the wind from blowing away your body heat.
Stop by Jus’ Running to shop their wide assortment of running apparel and accessories with popular brands like The North Face, Rabbit, Brooks, Nike, Janji, and more!

Register for a Race
Registering for a local race is a very effective way to get your motivation up. There are a number of local races, from the 1 mile to the 10k to the ultra distance, in the Asheville area this time of year. Save a little money by registering early as entry fees are less expensive far in advance.

Be Seen!
In addition to dressing smart, it is also imperative to consider visibility when running in the winter months. “Making sure you are visible is key when running this time of year. Short days mean that many of our afternoon runs will end in darkness. Be smart and run with a headlamp or at the very least a blinker so you can notify others of your presence on the road and trail,” says Joe Ainsworth.

One Dollar Lifesaver
Keep a few pairs of hand warmers nearby for those extra cold days. They cost just about one dollar each and will stay warm for at least five hours once opened. Slide one in each glove right before you head out for the run and you’ll be glad you did. Jus’ Running is one of the many places where you can find these.

Hopefully, these tips help you get out there and run despite the cold weather. Missing a few pieces of cold-weather running apparel? Jus’ Running is Asheville’s premier run specialty store and has a wide assortment of running apparel, gear, and footwear for everyone. They also always have staff on hand who can answer your running-related questions.

Luke Paulson is the general manager of Jus’ Running in Asheville, NC. Paulson has always identified as an avid runner, from his high school cross country and track days at Durham Academy, his two years of collegiate running at Colorado College, to his post-collegiate career. Paulson’s post-collegiate years have been spent focusing primarily on longer distance races such as 50k and 50 miles, though he does still mix in shorter distance road races during training to keep his speed.