We are celebrating an important occasion on September 24 – the 15th anniversary of the Power of Pink. It’s hard to believe it has been that long since the idea was first conceived but we are extremely proud of what has been accomplished and the people it has helped in that time. 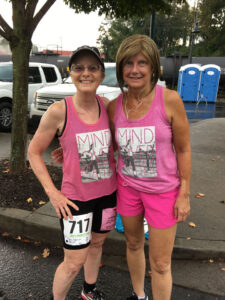 Marcia Tate (left), was the impetus behind the Power Of Pink in Haywood County, NC

Based on the feedback we heard and the declining participation numbers, the decision was made to relocate the 2018 event to the Frog Level section of Waynesville. Here we found a much flatter course headquartered on Commerce Street, that the Town of Waynesville has allowed us to close for the morning. Word of the change quickly spread and by race day we had 302 walkers and runners. Rain hampered attendance a little in 2019 but we knew that momentum was building in this new location and the event had a rebirth. Then came 2020 and the COVID shutdown.

We knew 2021 was going to be a challenge. By September, society was slowly reopening but people were still hesitant to be in a crowd. While our field was significantly less than the previous two events, it was invigorating to be outside again, putting on this event and continuing to raise much-needed funds.

As we speed toward the 2022 edition of the Power of Pink, we are optimistic. Running events have not fully recovered from the pandemic, and while we may not see our largest field ever, we feel confident the decision we made to move to Frog Level will pay dividends moving forward. We will have a record number of Theme Baskets this year and are continuing to build other aspects of the event to further the legacy that was started in 2007.

Our organizing committee constantly evolves and while the founding members of this event are no longer involved, they should feel proud the event they started has raised over $175,000 to provide these still-needed services to the underserved population of Haywood County.